In a Mere full of Rime: a search for photography’s essence 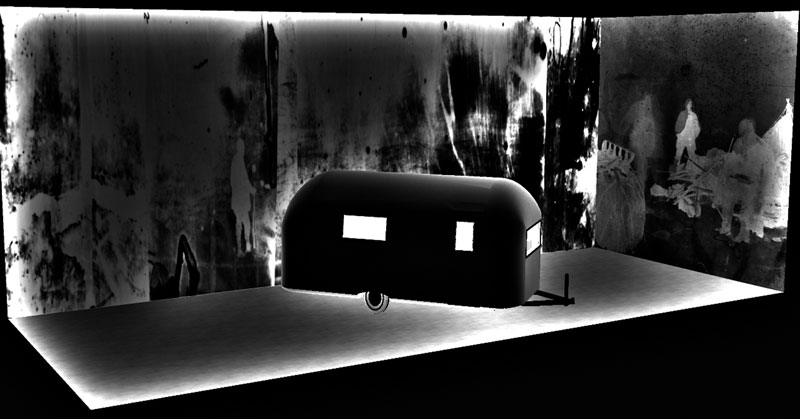 EXHIBITION: In a Mere Full of Rime: a search for photography’s essence

We generally think of photography as a human-driven activity defined by a momentary capture of the world before us. How could this understanding of photography be challenged by a nineteenth century roll of film that lay in a shallow pool of ice and was subject to a series of slowly-evolving, non-human encounters for 33 years before it was developed? This is the central question behind A Mere Full of Rime: a search for photography’s essence, the Institute of Cultural Inquiry’s month-long collaborative and interactive residency exploring the limits and potentialities of photography at Crossroads School’s Sam Francis Gallery, opening January 15, 2015.

The residency unfolds in an environment whose design derives from the very source material of the residency — 93 photographs originally taken by a member of an ill-fated balloon trip to the North Pole in 1897. We first encounter these photographs as oversized images hanging on the gallery walls where, scaled to the size of the polar world they were once tasked to capture, they are, paradoxically, unable to fulfill a documentary function. Instead, these images present a record of secret signals created on the film by nature’s contaminations and invasions. In their bruises and scars, we find clues about what animates these photographs, what structures them, and the urgency that makes them manifest; we find a suggested story beyond our own desires, one yet to be endowed with meaning. The walls inspire and delimit the visual realm of the residency while offering a backdrop to the researcher’s field station.

Designed from another cultural icon that, like photography, is often called on to embody and carry our phantoms and dreams, the traveling ICI field station is a handmade, paper, Airstream-like structure that houses and records the residency’s research activities. With its shiny surface, the vessel both consolidates and amplifies the visual world that surrounds it; that world—with its photographic fata morganas, its mirrored surfaces, its walk ways filled with large, glacier-like boxes of paper, and its darkened spaces interrupted by eruptions of light—seems to simulate the cold, barren place in which the featured photographs were born. Yet, this is also a world filled with the materials and processes of film-based photography. In truth, the polar trip that produced the images of the residency’s focus was gleaned by the researchers not to create a stage set of some past event but to create a land that is both ‘here and not yet built’ in which the images that inspired the residency are Möbius-like with the world they both inhabit and create.

In a similar way, the researchers’ toolbox relies less on the actual story of how the polar images ‘came into being’ and more on the modes of engagement that brought these images to the ICI’s attention. The photographs in question have always circulated in closed worlds – from the isolated and cut-off polar world of their embryonic beginning, to the frozen island of their undeveloped latency, then the archive drawer where, once developed, they languished due to legal entanglements, and finally to their current residency on a Swedish website, where copyright has limited their circulation. Realizing that these photographs exist both because of and in spite of their limited engagements, the ICI researchers have decided to treat their toolbox as another closed set – in which tools and materials are limited to those brought into the residency on day one and in which all the materials and remnants created will remain on site. Thereafter, any tools or materials needed will be added through MacGyver-esque maneuvers augmented by the researcher’s own ingenuity.

The residency toolbox abides by this restriction as a means of animating the researchers, but the work of the residency will not be subject to a closed set of rules. Inspired by the philosophical work of Deleuze and Guattari – who believed you have to create new concepts for unknown lands, the researchers have eschewed rule-based models, opting instead for an open, self-organizing system that is constantly adjusting and re-organizing itself. The concepts the researchers hope to pursue will not belong to one of photography’s discursive systems but will exist only in and because of the residency world, where they will reveal themselves over the course of the project as a means of proposing “a new threshold, a new direction, a new course for the border.” The residency will be less a testing site of rationally deduced theories about the limits of photography and more a series of meaningful encounters with residency-inspired concepts, and with the individuals who carry these concepts to the researchers in urgently scheduled interchanges. Together, these new ideas will help to frame the constantly shifting direction of the residency’s work.

Even with its overlaying systems of self-reference, In a Mere Full of Rime should not be thought of as a self-contained ‘world as art’ that could travel to any place that is big enough to house it. Ultimately, this is not a work of art to be placed into a world that can then be documented in a photograph but a “ work in art’s world,” as art historian Pamela Lee has termed it, where the photographs under study are both objects and agents of this art world. As much as the residency researchers will consider other trajectories, other histories, and other borders for photography, theirs is ultimately a research ‘at the outside of photography but not outside it.’ As such, the residency’s acts of interpretation will strive to ignite a network of associations, interrelations and affinities between these exceptional images and our current understandings of photography but not without tracking the art world’s stake—including the researcher’s own stake—in maintaining or disrupting these very boundaries.

In a Mere Full of Rime: a search for photography’s essence is a collaborative residency project of the Institute of Cultural Inquiry (ICI) in conjunction with Crossroads School’s Sam Francis Gallery and the Thin End of the Wedge (the E of the We) a peripatetic research entity that helps to bring ICI projects to sites around the world. The residency runs from January 16 to February 13, 2015 at the Sam Francis Gallery in Santa Monica, CA. The Opening is Thursday, January 15th from 6-8 pm. A finissage is planned for February 15 from 4-6 pm.

(Please note that the exhibition was extended to February 20, 2015)

This entry was posted in Activities. Bookmark the permalink.