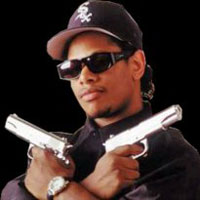 Eazy-E has been called the godfather of “gansta rap”. An American rapper who performed solo and in the hip hop group N.W.A., he is notorious for his creation of Ruthless Records which featured artists such as Dr. Dre, Ice Cube, DJ Yella, MC Ren, and Arabian Prince and produced such hits as “Boyz-n-the-Hood”.

Eazy-E’s debut album, Eazy-Duz-It, was released on September 16, 1988, and featured twelve tracks. It featured the musical genres West Coast Hip Hop, Gansta Rap and Golden Age Hip Hop. It has sold over 2.5 million copies in the United States and reached number forty-one on the Billboard 200. Eazy-E’s only solo recording was a remix of the song “8 Ball”, which originally appeared on N.W.A and the Posse. The album featured Eazy-E’s writing and performing; he performed on eight songs and helped write four songs.

Eazy’s main influences included 1970s funk groups, contemporary rappers, and comedians. When reviewing Eazy’s albums, many critics noted his unique overall style, with Steve Huey of the All Music Guide writing: “While his technical skills as a rapper were never the greatest, his distinctive delivery (invariably described as a high-pitched whine), over-the-top lyrics, and undeniable charisma made him a star.”

Since his 1995 death, he has inspired numerous book and video biographies dealing with both his career and the specifics of his death. Jerry Heller and Gil Reavill wrote the book Ruthless: A Memoir, which deals with Eazy-E’s lifestyle and diagnoses. When Eazy was diagnosed with AIDS, many stories and statements were released in magazines like Jet, Vibe, Billboard, The Crisis, and Newsweek discussing AIDS and the rap community in a new way.