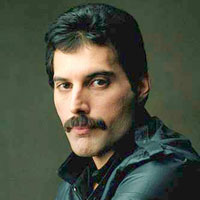 Freddie Mercury was 45 when he died of AIDS in 1991. Mercury, famous for his privacy and refusal to do interviews, hid news of his fatal illness for years, despite the prevalence of media attention to the issue. On his deathbed he releases a final statement confirming that he was HIV positive and had AIDS.

Mercury is best known as the over the top front-man of the glam rock band Queen, whose worldwide hits like “Bohemian Rhapsody” and “We Are the Champions” fused rock theatricality with heavy metal sound. Beginning in the early 70’s, Freddie Mercury led Queen to eighteen albums that sold 80 million copies worldwide along with nearly a dozen U.S. hit singles. Queen threaded British glam pop, operatic arias, hard rock and theatrical accoutrement to create a new sort of artist and sound. Mercury took everything further with his love of excess and blatant disregard for conventional limits. “Bohemian Rhapsody” is only one example of his musical extravagance. He pushed it even further when it came to his style and performance persona often appearing in leather storm-trooper outfits or woman’s garb, pointedly challenging and mocking the typically homophobic hard-rock world.

Sighting his greatest influences as Jimi Hendrix and Liza Minelli, he has garnered a fame as unique as his heroes’. Raised in India, he has been referred to as “Britain’s first Asian rock star”,  shocking the world with his four octave range in the early 70’s. In 2006, Time Asia named him one of the most influential Asian heroes of the past 60 years, and he continues to be voted one of the greatest singers in the history of popular music. In 2008, Rolling Stone editors ranked him number 18 on their list of the 100 greatest singers of all time.