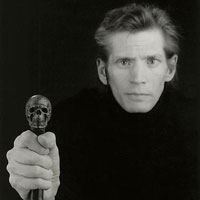 Mapplethorpe first gained notice in the late 1970’s for his classically  composed, elegantly lit and expertly printed photographs of still lifes and nudes, often with explicit homoerotic content. His works gave an undeniable, sculpture-like beauty to controversial subject matter, an aspect which disarmed many of his fans and detractors. He set himself apart from many of his contemporaries by treating the camera less as a documentary tool and more as a platform for invention and role play. In two self-portraits taken in 1980, he appeared once as a leather clad macho man and again as a sexy femme fatale.

He candid homoeroticism is recognized for generating an intense debate over the public funding of artwork. In 1989, Robert Mapplethorpe: The Perfect Moment was set to show at the Corcoran Gallery of Art. However, when the board of the Corcoran and several members of the U.S. Congress saw the pieces that were to be shown, the museum refused the exhibit, citing inappropriate content. The show was moved to the Washington Project for the Arts which showed the exhibit from July 21 to August 13, 1989. In 1990, the Contemporary Arts Center was charged with obscenity. They were tried and found not guilty. This incident along with future incidents such as the UCE controversy, where the West Midlands Police attempted (and failed) to ban a book of his images from a The University of Central England, are credited with broadening and affirming artist rights even as his work compromised public funding for controversial arts projects.

Nearly a year before his death, the ailing Mapplethorpe helped found the Robert Mapplethorpe Foundation, Inc to protect his work, advance his creative vision, and to promote the causes he cared about. Since his death, the Foundation has raised and donated millions of dollars to fund medical research in the fight against AIDS and HIV infection.