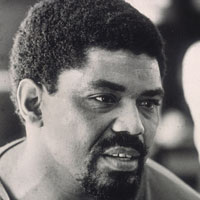 The founder of the Alvin Ailey American Dance Theater, Alvin Ailey was a grand force in the popularization of modern dance, a pioneer of African-American dance aesthetic, and an activist for the inclusion of African American dance forms in the canon of 20th century performance art. Valuing eclecticism, Ailey utilized both classic and modern technique to form a unique aesthetic perhaps best displayed in his choreographic masterpiece Revelations. Ailey was known for approaching his dancers more in the manner of a jazz conductor than a director, requiring them to infuse his choreography with a personal style that best suited their individual talents. His openness to input from dancers heralded a paradigm shift that brought concert dance into harmony with other forms of African-American expression. In 1992 Alvin Ailey was inducted into the C.V. Whitney Hall of Fame at the National Museum of Dance in Saratoga Springs, NY.

Alvin Ailey was openly gay and was romantically linked to political activist David David McReynolds throughout the 1950’s. Despite his openness within the performance art community, upon his deathbed he requested that the cause of death be listed as terminal blood dyscrasia. He has since been discussed as a quiet advocate for gay and African American Communities.