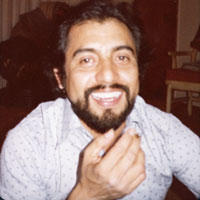 Carloz Almaraz was a Mexican-American artist who helped pioneer the Chicano street aesthetic. In 1973, Almaraz was one of four organizers of Los Four, a group of artists that with works such as “Murals of Aztlan” managed to bring attention from mainstream art critics and painters to the Chicano street arts movement . Their 1974 exhibition at the County Museum of Art was the first to bring a barrio aesthetic uptown. His works “Echo Park” and “Boycott Gallo” are passionate representations of his style and his best-known works to demonstrate his relationship with LA and its Chicano street art movement.

In the 1970’s he was politicized and traveled to Cuba and China to glean truths about Marxism. He became an active advocate for migrant farm labor and made work for famed Arizonan and fellow Chicano, Cesar Chavez. His paintings, murals and banners became well known visuals at the forefront of United Farm Workers protests and rallies.

His work continues to enjoy popularity and was featured in the landmark “Pacific Standard Time” exhibitions, including “MEX/LA: Mexican Modernism(s) in Los Angeles 1930-1985” at the Museum of Latin American Art and “Mapping Another L.A.: The Chicano Art Movement” at the Fowler Museum.