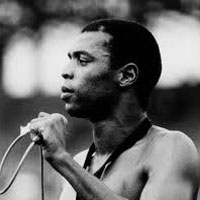 Fela Anikulapo Kuti was a Nigerian multi-instrumentalist musician and composer, pioneer of Afrobeat music, human right activist, and a political force against corruption and tyranny. Fela first developed his Afrobeat genre in Ghana in 1967. In 1969 he brought his new sound to the United States where Fela discovered the Black Power movement through Sandra Smith a partisan of the Black Panther Party—which would heavily influence his music and political views. Without the necessary work permits, his band, then Nigeria ’70, performed a quick recording session in Los Angeles that would later be released as The ’69 Los Angeles Sessions.

After Fela and his band returned to Nigeria, the band was renamed The Africa ’70, as lyrical themes changed from love to social issues. He then formed the Kalakuta Republic, a commune, recording studio and home for many connected to the band that he later declared independent from the Nigerian state. Fela and the commune were the subject of continuous controversy and frequently targeted with violent government retaliation for Fela’s strong anti-governmental music and writings. In 1977 Fela and the Afrika ’70 released the hit album Zombie, a scathing attack on Nigerian soldiers using the zombie metaphor to describe the methods of the Nigerian Military. The album was a hit and infuriated the government, setting off a vicious attack against the Kalakuta Republic. Fela was severely beaten, and his elderly mother was thrown from a window, causing fatal injuries. The Kalakuta Republic was burned, and Fela’s studio, instruments, and master tapes were destroyed. Fela’s response to the attack was to deliver his mother’s coffin to the Dodan Barracks in Lagos, and to write two songs, “Coffin for Head of State” and “Unknown Soldier”.

Despite the massive setbacks, Fela was determined to come back. He formed his own political party which he called Movement of the People. In 1979 he put himself forward for President in Nigeria’s first elections for more than a decade but his candidacy was refused.

On 3 August 1997, Fela’s brother, Olikoye-Ransome Kuti already a prominent AIDS activist announced his younger brother’s death a day earlier from Kaposi’s sarcoma which was brought on by AIDS. More than a million people attended Fela’s funeral at the site of the old Shrine compound.