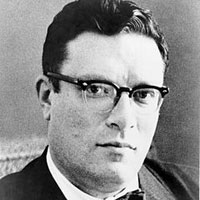 Isaac Asimov was an American author and professor of biochemistry at Boston University, best known for his works of science fiction and popular science books. Asimov was one of the most prolific writers of all time, having written or edited more than 500 books and an estimated 90,000 letters and postcards. His works have been published in all ten major categories of the Dewey Decimal System. Isaac Asimov is widely considered a master of hard science fiction and, along with Robert A. Heinlein and Arthur C. Clark, he was considered one of the “Big Three” science fiction writers during his lifetime. Asimov’s most famous work is the Foundation Series; his other major series are the Galactic Empire series and the Robot series, both of which he later tied into the same fictional universe as the Foundation Series to create a unified “future history” for his stories. He wrote many short stories, among them “Nightfall“, which in 1964 was voted by The Science Fiction Writers of America as the best short science fiction story of all time.

Most of his popular science books explain scientific concepts in a historical way, going as far back as possible to a time when the science in question was at its simplest stage. He often provides nationalities, birth dates, and death dates for the scientists he mentions, as well as etymologies and pronunciation guides for technical terms. Examples include his Guide to Science, the three volume set Understanding Physics, Asimov’s Chronology of Science and Discovery, as well as numerous works on astronomy, mathematics, the Bible, William Shakespeare’s works, and chemistry.

Asimov suffered a heart attack in 1977 and had triple bypass surgery in December 1983. When he died in New York City on April 6, 1992, heart and kidney failure was reported as the cause of death. Ten years after his death his autobiography, It’s Been a Good Life, revealed that the myocardial and renal complications were the result of an infection by HIV, which he had contracted from a blood transfusion received during his bypass operation.