PRESS RELEASE: With Everything but the Monkey Head Iteration III 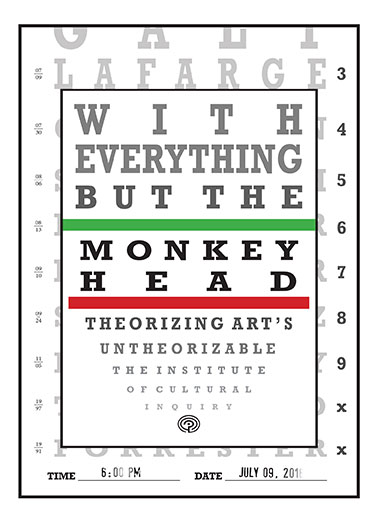 The Institute of Cultural Inquiry (ICI) is pleased to announce the continuation of With Everything but the Monkey Head: Theorizing Art’s Untheorizable Practices, a major project centered on the burgeoning field of studio-based research in the visual arts. This project is a long-term collaboration with a host of diverse participants including nine researchers who have participated in some sort of visual research at the ICI during the last 5 years; a set of specially selected interlocutors whose questions will help construct and strengthen the ideas central to each researcher’s project; and the curious spectators who have always enriched ICI projects with their thoughtful discussion and debate during public exchanges.

The third iteration of the project will feature Antoinette LaFarge, a 2011 participant in the ICI’s 100/10/10 project (100 days/10 curators/10 artists). LaFarge returns to the ICI for a three-week residency during which time she’ll share her thoughts about her own research practices while collaborating with the ICI to build a treatise on the organization’s own visual research endeavors. Her stay will culminate in a finissage on July 9, 2016 during which time she’ll share her ideas with the public.

Studio-based research, also known as practice-based research, research in the visual arts, and at times, visual research, as it has been called at the ICI, has quickly become a catch-all term used to describe many contemporary art practices, some but not all of which are anchored by the ‘new materialism.’ Many of those who advocate for this designation believe the imaginative and intellectual work undertaken by almost all artists is a form of research that can be equated with ‘laboratory work’ in other disciplines. Other supporters of studio-based research feel that be it an interpretation, a critique, or an art object, the work produced under this banner must result in ‘new knowledge,’ thereby equating the work of artists who achieve this goal with a somewhat antiquated model of the research scientist.

The most challenging of these issues is one that underlies the entire project. That is, that any theory about ‘art as research’ is, by definition, untheorizable since, as James Elkins points out, ‘thinking through the visual’ is a type of inquiry that is outside language. How do we, then, theorize something that is untheorizable? The ICI believes the artist researchers at the center of this burgeoning field might have an advantage in this regard. Art is thought, not theory and most visual researchers postpone theory, judgments, opinions, and conclusions about their own art, often delaying these considerations indefinitely but certainly while they work in the studio. It is to these researchers that the ICI has turned asking them to participate while they are actively engaged in their own visual inquiry in a manner that links back to the original meaning of ‘research’ – to circle around and around. The ICI will encourage the researchers of With Everything but the Monkey Head to circle around a potential theory of studio-based research as it might exist in the studio through the slips, stutters and spasms of each researcher’s agrammatical process. 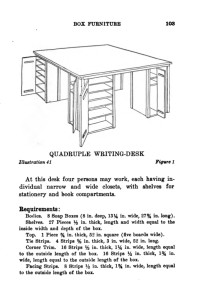 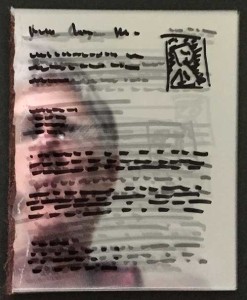 This time around, the roles of happenstance, coincidence and serendipitous tangents within the research process take center stage as Antoinette LaFarge engages with the newly realized (yet wholly) unconscious influence of the letter ‘W’ throughout her practice as an artist, writer, and scholar. For LaFarge, whose 2011 Wikipedia-based project at the ICI was focused on Louise Brigham, a forgotten 20th century furniture designer who the researcher stumbled upon in a 100 year-old magazine in the ICI Ephemera collection, visual research breeds unexpected avenues of knowledge production. During this short residency she will conjure new ways of researching, writing, and building a virtual knowledge space into existence.