PRESS RELEASE: With Everything but the Monkey Head Iteration IV 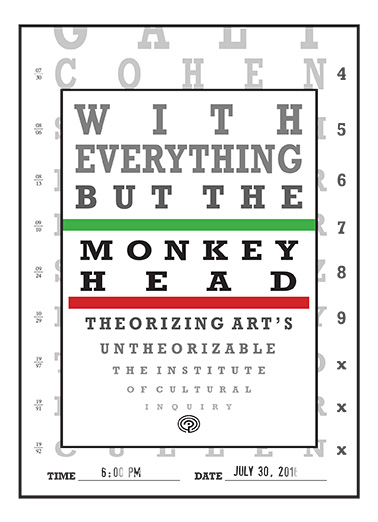 The fourth iteration of the project will feature Greg Cohen, a 2012 participant in the ICI’s Visualist-in-Residence (VIR) project. Cohen returns to the ICI for a three-week residency during which time he’ll share his thoughts about his own research practices while collaborating with the ICI to build a treatise on the organization’s own visual research endeavors. His stay will culminate in a finissage on July 30, 2016 during which time he’ll share his ideas with the public.

For Cohen, whose 2012 VIR project at the ICI was focused on the (re-)creation of a speculative archive, research stems from investigation of the unknown. During this short residency he will employ modes of self-portraiture to explore the interplay of appropriation and fictive constructions, pondering how such acts of ‘borrowing’ and ‘making’ contribute to a speculative research practice.