PRESS RELEASE: With Everything but the Monkey Head Iteration VI 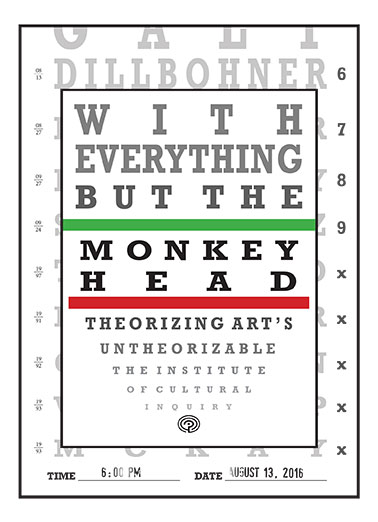 The sixth iteration of the project will feature Christel Dillbohner, a 2013 participant in the ICI’s Visualist-in-Residence (VIR) project. Dillbohner returns to the ICI for an intense one-week mini residency during which time she’ll share her thoughts about her own research practices while collaborating with the ICI to build a treatise on the organization’s own visual research endeavors. Her stay will culminate in a finissage on August 13, 2016 during which time she’ll share her ideas with the public.

During her residency, Dillbohner will examine the roles of coincidence and serendipity, to render the (seemingly) invisible connection between these two phenomena into visibility and generate new possibilities for seeing and being in the world—ones which demand the conscientiousness of open eyes and an emptied mind to observe things “mit dem anderen Blick”.