Lise Shinkle Patt, PhD, the founder/director of the Institute of Cultural Inquiry, died of cancer at the age of 64 on the 16th of November 2019, at her home in Topanga Canyon, California. Family and friends surrounded her at the time of her death. She is survived by her husband, Dr. Stephen Patt; her daughter, Ariel; her son, Paris Gulbro and his wife, Elizabeth; her sister, Nikki Shinkle Blair and her husband, Michael Blair as well as their children, Talia and Zach; her mother, Dr. Cynthia Leavitt of Los Angeles; and her father, DJ Shinkle of Chicago.

A visual researcher, artist, writer, Lise Patt was born on October 7th, 1955 in Southern California. She attended the University of California, Berkeley, and later taught art in San Pedro de Macoris, Dominican Republic, where she met her husband of over 40 years, Stephen Patt, as he was studying medicine. They married and moved to Stephen’s hometown, Baltimore, MD, and later to Gainesville, FL while Stephen finished his medical studies. While Stephen was in further training in Fresno, CA, they had their first child, Ariel. The family then lived in the New York area from 1983 to 1986, while Lise Patt was completing her MFA at Pratt Institute. They subsequently moved to Los Angeles in 1986 where they had their son, Paris.

Seeking studios in Los Angeles, Lise Patt and others rented 5,000 square feet at the Helms Bakery Building in Culver City in 1986, which became SITE (Seeking It Through Exhibitions), an alternative art space, where she served as executive director from 1988 to 1990. The family relocated to the New York area once again, in 1991, where Patt undertook doctoral work in the PhD program in Art History at the Graduate Center of the City University of New York, even while developing the seed of the Institute of Cultural Inquiry, a project begun in conversations with the LAL group as early as 1989. The Patt family returned to Los Angeles and settled in Topanga Canyon in 1994. Lise Patt achieved her PhD in 2003 with her dissertation, That Which Stimulates and Numbs Us: The Museum in the Age of Trauma, while building and directing the ICI.

She continued to create her own inimitable and complex art, and she also taught art history and visual arts (notably at Crossroads School for Arts & Sciences in Santa Monica, 1999-2004, and 2008- 2010), participated in international scholarly conferences, and wrote numerous essays, including many catalog texts for artists.

Patt treated collaboration as her primary art medium, and the not-for-profit Institute of Cultural Inquiry, which she founded and directed, was her most ambitious artistic project. A peripatetic visual think tank, the ICI investigates entrenched visual technologies and how they are used to document, imagine, remember, and conceal what we call ‘culture.’ The ICI was headquartered at 1708 Berkeley Street, Santa Monica, from 1994 to 2001, when it moved to 1512 S. Robertson, where it has been headquartered ever since.

The ICI formed initially to organize the AIDS Bottle Project, an urgent response to the AIDS pandemic that started in 1990 in Los Angeles. In 1993 in New York, the AIDS Chronicles joined the roster of projects for which ICI would become known. The ICI was active in publishing through its ICI Press, for which Lise Patt co-edited several volumes, among them the anthology, Searching for Sebald: Photography After W. G. Sebald (2007). Both the anthology and Patt’s introductory essay, “Searching for Sebald: What I Know for Sure,” received considerable press coverage. Other collaborative projects she envisioned and led at the ICI include Everything but the Monkey Head (2016- 2019); In a Mere Full of Rime (2014-2015); 100/10 (100 days/10 visions, 2011-2012); Traumbagger (1994- 2019), The Manual of Lost Ideas (1998-2001), numerous Interpretive Field Projects (2002-2019) and The John Galt Performance Group (1990-2000). She collaborated closely with, among other groups, the Thin Edge of the Wedge and The Museum of Forgery. The Institute of Cultural Inquiry currently continues under the direction of the Board and an Acting Director, in order to secure the legacy of Lise Patt and the ICI.

Lise Patt was an inspirational yet hard-to-characterize Renaissance figure. Patt’s life as an artist—and those of her avatars—were focused on questioning the institutions that rule art, often taking the role of the trickster to ask, “Who decides?” She will be greatly missed by her family, by her many friends, associates, interns, and students, and by the community of artists, scientists, writers, thinkers and others around the world interested in and inspired by her questions, as well as her influence on the processes of cultural inquiry. 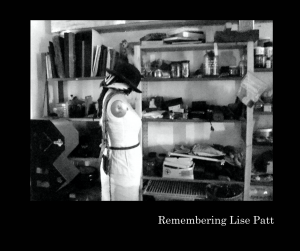 A unique and beautiful artist’s book, Remembering Lise Patt has been created by the artist and ICI Associate Axel Forrester in memory of her friend and longtime collaborator. Here you will find glimpses of the many facets of Lise’s extraordinary life: her projects, performances, and installations, her field trips to England and Iceland, her studio and ICI work spaces. The book is offered at cost for about $20 plus shipping. You can also download the book as a free PDF.