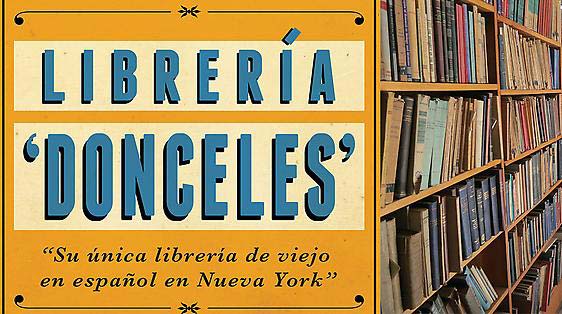 “Pablo Helguera’s Librería Donceles is an itinerant bookstore of ten thousand used books, in Spanish, of virtually every subject—literature, poetry, art, history, science, medicine, anthropology, economics, and politics, as well as children’s books [that] will literally be the only Spanish-language used-book store in the city.”

“To create Librería Donceles, Helguera assembled donations of books from individuals and groups in Mexico City and elsewhere, offering his artwork in exchange for boxes of books and producing an Ex Libris for each donor that acknowledges the particular provenance of every volume. Librería Donceles—whose title is inspired by the old bookstores that line Donceles Street in Mexico City’s historic center—will foster the open-ended and unhurried environment that draws people to used-book stores, where customers enter without a particular title in mind and instead roam the shelves with the hope of spontaneously discovering a book that beckons them.” Visitors to the Librería Donceles—Spanish-speakers and non-Spanish-speakers alike—will be welcomed in this spirit and invited to a brief consultation with the artist or an associate. Once their interests and “bibliological profile” (as Helguera has described it) have been assessed, they will be given suggestions on where to look. But visitors ultimately make their own choices. Only one book per customer will be allowed, in exchange for a pay-what-you-wish donation. Proceeds from these transactions will be donated in turn to local Spanish reading programs for immigrant communities.”

“By rendering visibility to the Spanish language in an American city, Librería Donceles affirms the importance of the cultural dimension of the language and raises questions about how Spanish might be reconnected to its diaspora, as well as integrated into the broader cultural life of New York. For Helguera, the idea of the “double removal” of a book, indeed of any object, is an important one, with both personal and historical resonances. Conjuring the spirit of L.P. Hartley when he wrote “The past is a foreign country: they do things differently there,” the books of Libreria Donceles are messengers from other times, places, and lives. With their public and private histories, the books await new lives, new meanings, as they pass on to new owners.”

This entry was posted in News. Bookmark the permalink.