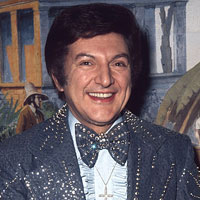 Best known for his extravagant showmanship, and accessible treatments of classic pieces such as Chopin’s “Minute Waltz” and Tchaikovsky’s “Piano Concerto No. 1”, Liberace was a larger than life vocalist, pianist and performer. His career spanned four decades of concerts, recordings, motion pictures, television and endorsements. During the 1950s–1970s he was the highest-paid entertainer in the world and embraced a lifestyle of flamboyant excess both on and off the stage.

Although he was classically trained, Liberace made the decision to move away from straight classical performance in the 1940’s and reinvented his act to one featuring pop alongside the classics. Largely abandoning the classical concertgoer, he changed from classical pianist to showman, unpredictably and whimsically mixing serious with light fare. Famous for his gimmicks such as playing along with a phonograph or alongside a candelabrum, and wearing gaudy golden tailcoats, his innovation came largely out of necessity given the harsh competition he faced in the classical piano world. He quickly distinguished himself from the majority of musicians by experimenting with lighting, stage effects, costuming and audience interaction.

Making a name for himself mostly between nightclubs and extravagant Las Vegas shows, Liberace was often criticized and received harsh reviews of his piano playing and lack of reverence and fealty to the great composers. However, Liberace would famously respond “I do not give concerts, I put on a show”. Unlike the concerts of classical pianists which normally ended with applause and a retreat off-stage, Liberace’s shows ended with the public invited on-stage to touch his clothes, piano, jewelry, and hands. Kisses, handshakes, hugs, and caresses usually followed. Despite the critics Liberace performed for Harry S. Truman and Pope Pius XII, and performed with such respected giants as Nat King Cole and Sammy Davis Jr.

Liberace struggled for years against claims that he was a homosexual engaging in numerous lawsuits and contrived relationships. The cause of his death is controversial to this day.