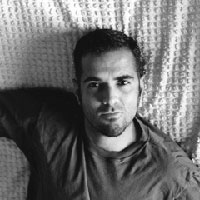 Felix Gonzalez-Torres was a Cuban born, American visual artist who is best known for his minimalist and relational installations that deal with issues of depletion and regeneration, loss and inertia. Utilizing mundane materials such as strings of light bulbs, cellophane wrapped candy and stacks of paper, González-Torres has created some of his most memorable exhibits such as Untitled (Memorial Day Weekend) or Untitled (Placebo). González-Torres was considered within his time to be a process artist due to the nature of his ‘removable’ installations. Many of his artworks invite the viewer to take a piece of the work with them such as a packaged candy from a pile in the corner of an exhibition space and, in so doing, contribute to the slow disappearance of the sculpture over the course of the exhibition. His work combines an almost classical sense of restraint and beauty with a critical sensibility.

His work is often discussed in the context of his struggle with HIV and AIDS. In 1987 he joined Group Material, a New York-based group of artists whose intention was to work collaboratively, adhering to principles of cultural activism and community education. Along with the other members of the group — Doug Ashford, Julie Ault, Karen Ramspacher, and Tim Rollins — in 1989 González-Torres was invited by the MATRIX Gallery at the Berkeley Art Museum and Pacific Film Archive  to explore the subject of AIDS. His struggle became especially public when his lover Ross Laycock died of AIDS and González-Torres memorialized him with Untitled (1991), twenty four billboards installed throughout New York City that show a monochrome photograph of an unoccupied bed. A 1996 exhibition at the Guggenheim Museum in New York, was his last solo exhibition while he was still living but his career and fame has continued to grow since his death. In 2007 he represented the United States at the 52nd International Art Exhibition, la Biennale de Venezia [the Venice Biennale], only the second artist in the 100+ year history of the event to represent the United States after his death.