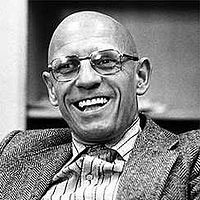 Michel Foucault was 57 years old when he died of AIDS in 1984. One of France’s most prominent philosophers and historians, Foucault’s writings explored society’s relationship with language, mental illness, crime and sexuality. In his books, Foucault argued that society transforms concepts such as madness, delinquency and sexuality to convenience, preserve and control dominant social systems.

His most notable works include “Madness and Civilization” and “The History of Sexuality”, while the most prominent of his dialogues revolve around structuralism and post-structuralism.

In addition to his academic work, Foucault was active in numerous social causes, including groups that advocated abolition of prisons. Foucault helped found the Prison Information Group to provide a way for prisoners to voice their concerns. This coincided with Foucault’s turn to the study of disciplinary institutions, with a book, Surveiller et Punir (Discipline and Punish), which “narrates” the micro-power structures that developed in Western societies since the 18th century, with a special focus on prisons and schools. He also spoke out against abuses of gay rights and in defense of homosexual lifestyles.

He was the first high-profile French personality who was reported to have AIDS. Little was known about the disease at the time. In the front-page article of Le Monde announcing his death, there was no mention of AIDS, although it was implied that he died from a massive infection.