PRESS RELEASE: With Everything but the Monkey Head Iteration I 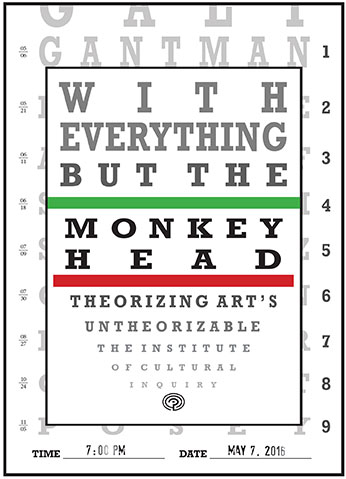 The first iteration of the project will feature Martin Gantman, a 2013 participant in the ICI’s Visualist-in-Residence (VIR) project. Gantman returns to the ICI for a three-week residency during which time he’ll share his thoughts about his own research practices while collaborating with the ICI to build a treatise on the organization’s own visual research endeavors. His stay will culminate in a finissage on May 7, 2016 during which time he’ll share his ideas with the public.

For the first iteration, Martin Gantman, asserts that any theory-making, including one centered on artist praxis, must first interrogate the terms used to set up that activity. He asks, what is theory, what is research, or practice, and what is an activity or event that is ‘something-based?’ For Gantman, whose 2014 Visualist-in-Residence project at the ICI was centered on a critique of the institutional archive, this uncomfortable but necessary questioning can emerge in ‘zones of awkward engagement’ to borrow Anna Tsing’s term. Whether in a museum, a studio, a Farmer’s market, or back street alley full of third world vendors, these zones refuse art world rituals that work to silence or obscure issues of social or political importance.

*Visitors are welcome by appointment Tuesday and Thursday afternoons throughout each residency. ICI programming and events are free unless otherwise noted.*

Download a copy of the Press Release for Iteration I.