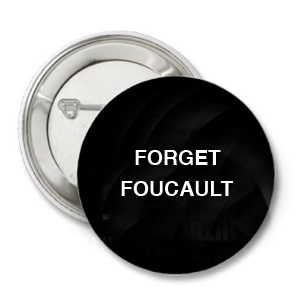 PARKING: Metered street and paid garage parking at both venues

In conjunction with World AIDS Day, the Institute of Cultural Inquiry (ICI) is pleased to present Forget Foucault, a tactical event aimed at AIDS awareness and remembrance.

Soon after it was recognized as a disease process in the early 1980s, the struggle to identify, test, and prevent AIDS was brought to public notice by a wide range of AIDS activists—groups such as ACT UP and community projects such as the Names Project AIDS quilt. By 2000, as the numbers of new infections and deaths within the US dropped, so too did the public’s involvement in AIDS awareness. And yet, on the global front the pandemic continues to ravage whole populations. In 2010, the UN AIDS committee recorded 1.8 million AIDS-related deaths, mostly in third world countries, Eastern Europe and Central Asia. Even in North America, where the infection rate has remained stable over the last five years, over 1.5 million people are HIV positive, a conservative statistic since, according to CNN, 1 in 5 sexually active adults do not know their HIV status. The public cry of the AIDS activists from the 1990s is well-worn but still true: the AIDS crisis is not over. The ICI seeks to bring this topic back to the forefront by enlisting the public in a simple act of AIDS activism.

Forget Foucault utilizes button badges emblazoned with the names of notable people who have died as a result of AIDS coupled with the either “forget” or “remember.” In addition, two button pairs reflect the global progression of HIV over the last three decades. ‘Forget/Remember an anonymous woman’ and ‘Forget/Remember a parentless child’ reflect the spread of the disease in the last 15 years to non-western populations. On December 1, 2011, World AIDS Day, the public will have the opportunity to take up to two of these buttons from roving ICI representatives at two Los Angeles sites—one button to keep and one to pass on—in a combination of their choice (forget or remember; black or white). Through the simple act of selecting and wearing ICI buttons, individuals will have the opportunity to engage friends and strangers in a discussion about AIDS and the individual’s role in cultural awareness and action. 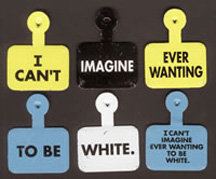 Forget Foucault builds on the tradition of disseminating political, commercial and/or artistic ideas through a wearable object. Since the button badge was invented in the late 1800’s, these seemingly innocuous objects have been used for everything from supporting political campaigns to advertising products to helping to fuel artistic projects. As economic, portable and wearable signposts, buttons have helped to spread the ideas that fueled the hippie movement of the 1960’s and the punk movement of the 1970’s and 80’s, and many of the major election campaigns of the twentieth century. Thus in this way, buttons have served as a form of social catalyst, a means for the spread of both suppressed and idealized notions. Further, Forget Foucault also draws on related artistic precedents such as the work of Yoko Ono, Keith Haring, and most notably, that of Daniel J. Martinez’s, who’s Whitney Biennial buttons sought to interrogate the hierarchies of our linguistic, socio-political and socio-physical interactions by giving visitors buttons that contained portions of a sentence that together formed the charged sentiment “I can’t ever imagine wanting to be white.” 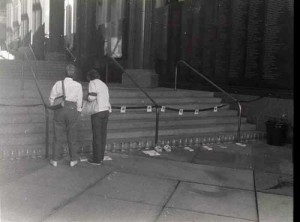 Over the last 20 years, ICI has remained steadfast in its efforts to raise awareness for AIDS, and has orchestrated numerous projects in order to interrogate the visual culture surrounding the epidemic. Forget Foucault marks a convergence of the ICI’s previousAIDS-related endeavors. The AIDS Bottle Project, started in 1990, utilizes a simple, etched glass jar to memorialize those who have died from AIDS and HIV-related illnesses. A separate project, the AIDS Chronicles, which began in1994, is a more activist project that records the (lack of) day-to-day discourse on AIDS in the New York Times. With a strategy outlined in Douglas Crimp’s landmark 1989 essay “Mourning and Militancy,” Forget Foucault combines the mourning aspect of the AIDS Bottle Project with the militancy of the AIDS Chronicles. By choosing individuals who are not known solely for their AIDS-related deaths or anonymous descriptions that are not solely linked to HIV (an anonymous woman, a parentless child), Forget Foucault furthers the ambiguity of its own guerilla semiotics. The buttons call to question both who and how we remember (or consequently choose not to remember). Can we remember everyone? Should we remember everyone? Can we forget some and not others? And, borrowing one of the ICI’s most famous maxims, ‘who decides’ how and who and what we remember?

Forget Foucault also interrogates the organization’s own historical trajectory. Formed urgently for urgent times, the ICI incorporated in 1994 at the request of institutions that were hosting AIDS-related ICI projects. Forget Foucault not only revisits sites of previous AIDS activism (the AIDS Bottle Project at LACMA in 1991 and the AIDS Chronicles at 3rd Street Promenade in Santa Monica in 1994) but it forefronts the organization’s own indebtedness to the AIDS pandemic. 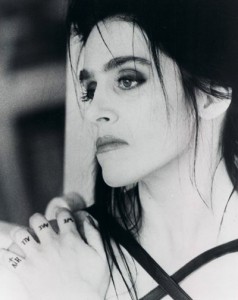 The ICI has received public notice in the last decade for its publishing and exhibition programs but it was born 20 years ago in a lacuna created by a virus that ‘disappeared’ some of art’s most powerful voices. The ICI was formed with the conviction that, as Diamanda Galás so vividly etched into our collective consciousness, ‘we are all HIV+.’ AIDS is not only a biological disease but a cultural one as well.

The Individuals featured in the button badges include: Michel Foucault, Fela, Freddie Mercury, Liberace, Easy-E, Arthur Ashe, Isaac Asimov, Alvin Ailey, Felix Gonzalez-Torres, Robert Mapplethorpe, Carlos Almaraz, a parentless child, and an anonymous woman. Participants will have the opportunity to share their interpretations both in person through impromptu, live webcast interviews, and online at the project’s website. All feedback will later be archived as part of the ICI’s Ephemera Kabinett, and will be available to view permanently via the Ephemera Kabinett blog.