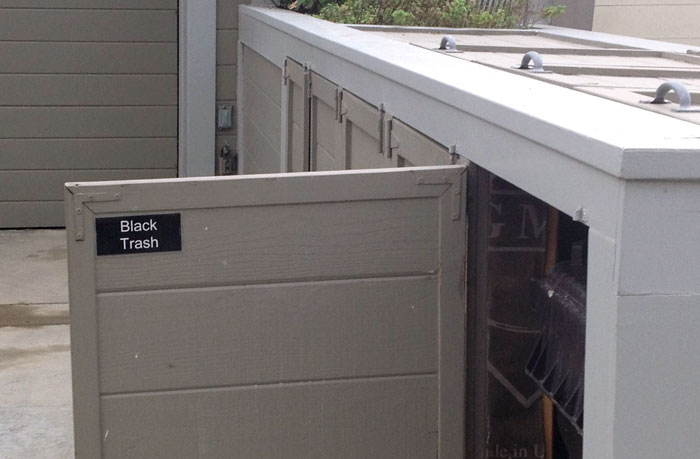 A recent, windy day in Malibu, CA revealed, in more ways than one, a ‘dirty’ underside of the American experience.

The door to an enclosed area for garbage cans had swung open exposing a seemingly ‘private’ directive. This part of town has three trash cans for different types of refuse: green for vegetation, blue for recyclables and black for garbage. Undoubtedly the compartment captured in the above image housed the latter trash can. Yet, once a force of nature dragged the private realm into the public, these two simple words became arresting at least, and to some members of the population even assaultive.

In the public arena these words bring to mind our country’s dark history with African-Americans and hint that this chapter of American history, one fraught with racism and class warfare, may not be as distant as we like to believe. For a phrase that also comes to mind when viewing this ‘innocent’ plaque is its antipode: ‘white trash,’ an often humorously used but always derogatory phrase that assigns the label ‘trash’ to the poor and often uneducated portion of the white population which is perceived as not behaving ‘white’ enough; thus reinforcing the racist idea that these are inherent characteristics of anyone who isn’t white.

Regardless, one can’t help but wonder how much more money and effort it would have taken to add one more word to this contentious pair on a door that swings open to a popular beach-side street…

This entry was posted in Cultural Inquiry and tagged cultural inquiry, semiotics, signs. Bookmark the permalink.