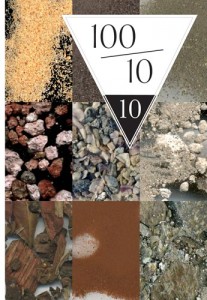 Free and open to the public
Selections from the collaborative final iteration of the 100/10 project can be viewed online here.

For the tenth and final iteration of the Institute of Cultural Inquiry’s ambitious project 100/10 (100 days/10 visions), Mappa Mundi: The Earth Project explores the notion that we are all of the earth, allied through terrestrial bounds, living along an assortment of grounds that reflect both the diversity and uniformity of our world. 100/10∆10 is a participatory project of the Institute of Cultural Inquiry (ICI) that exists with and through the terra publica – the people of the earth – who use the tools and networks of the Internet to collectively re-imagine a world map within the context of human experience.

The Earth Project draws inspiration from the Institute of Cultural Inquiry’s “Earth Cabinet”, a collection of dirt specimens from all over the world currently housed in a refurbished communion cabinet. These specimens comprise of dirt, dust, grit, shell, sand and other types of earth material from locations including: Ayres Rock, Australia; Suzhou, China; Stonehenge; the Berlin Wall; Zion, Utah; Jerusalem, Israel; Kanagawa, Japan; Paris Catacombs; the Grand Canyon; Gubbio, Italy; and Giza, Egypt. The “Earth Cabinet” collection brings together a myriad of geographic terrains to reveal where ICI and its publics have visited in the past, as well as where they might go in the future.

Building on the ICI’s interest in exploring the intangible and ever-changing phenomenon known as “culture”, Mappa Mundi: The Earth Project extends the focus of the “Earth Cabinet” by constructing and supporting an online world map where new spaces for perception, memory, history, and time are created by reinterpreting the practices of visual thinking within contemporary society. The project conceptualizes art as an open, cross-disciplinary culture-building activity, where hybrid forms of cooperation and production can emerge freely within the given form. The project’s use of a world map advances ICI’s belief that mapmaking is more about creating and revealing connections through the process of discovery than it is about simply charting areas of the world. With the project’s open-ended directions to help foster the potentialities inherent in participants’ interpretations, the platform of a world map doubles as a public laboratory for cultivating and developing ideas with and through the terra publica.

A unique catalogue will accompany this exhibition, modeled on the New Museum’s catalog for its 2008 landmark show After Nature. Catalogs for the 100/10 shows exist as a dustcover enfolding a slightly used copy of a book that has influenced the show’s curator and artist. 100/10∆10 uses a small, blank sketchbook with field implements, such as small specimen bags and identification tags, nestled between pages. This empty workbook points back to this project’s “potentialities inherent in participants’ interpretations” and calls upon individuals to move out into the “field” of the project, the very earth in which we all inhabit. The catalogs are available online in the ICI gift shop.

Beginning January 31, 2011 and running for 100 consecutive business days, the ICI site and its archives is undergoing a multitude of interpretations. ICI has invited ten researchers-artists, writers, and visual thinkers-to set into play ideas that blend contemporary visual practices with aspects of the ICI Earth Cabinet, Ephemera Kabinett, and a 2,500+ volume library along with the nooks and crannies of the eclectic, historically layered ICI space. With two weeks to conceive of their vision, curators will work in a designated laboratory modeled upon the transparent workspaces of 19th-century natural history museums. Each curator will conceptualize a new trajectory through ICI’s body, transforming the ICI display by the end of their residency. 100/10 project participants to date have included ∆1: Alex Harvey with Anna Ayeroff; ∆2: Antoinette LaFarge with Ruth Coppens; ∆3: Norway Nori; ∆4: Karen Frimkess Wolff and Paul W. Evans; ∆5: Pam Posey with Christine Nguyen; ∆6: Christel Dillbohner with Inge Kamps; ∆7: Christian Smith and Rosie Woodward Smith; ∆8: Jeremy J. Quinn and Michele Jaquis of Rise Industries; as well as ∆9: Corey Hitchcock and James Linnehan.