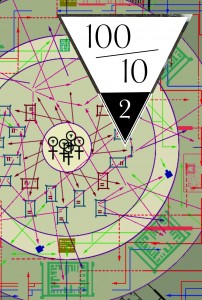 For “Evidence of Evidence,” curators Antoinette LaFarge and Ruth Coppens probe the relationships between evidence, information and the archive as they unearth lost connections within the Institute of Cultural Inquiry’s large body of eclectic holdings. Although researchers typically proceed with some idea of what they want to find out—a hypothesis to ask, a theory to test—LaFarge and Coppens have left it to the ICI archive to offer them a prompt. The nature of archival materials is to be presumptively evidential: but of what? “How do we walk the long road between origins and conclusions,” LaFarge asks, “to what extent do we derail ourselves and our successors by what we ourselves create and leave behind?” Documenting the process of excavation and its results, LaFarge and Coppens seize upon this residue to stir the archive’s memories, forge missing links and remember forgotten relationships.  The 100/10∆2 catalog, housing Lewis Hyde’s Trickster Makes this World, may be purchased in the ICI gift shop or through the ICI website.

Antoinette LaFarge is an artist-writer engaged with mapping the terrain where deception, actuality, and enactment come into conflict with notions of authenticity and authority. Her areas of activity include mixed-reality performance, interactive installation, avatar improvisation, and fictive art. Recent projects include WISP (World-Integrated Social Proxy) (2010), Hangmen Also Die (2010), World of World (2009), and Playing the Rapture (2008-09). In the 1990s she founded one of the first net-based performance troupes, the Plaintext Players. She has co-curated two groundbreaking exhibitions on computer games and art: “SHIFT-CTRL” in 2000 and “ALT+CTRL” in 2003, both at UC Irvine, where she is Professor of Digital Media in the Studio Art department. Her projects website is www.forger.com, and her blog is www.artisallwehave.com.

Ruth Coppens is a writer of historically inflected fiction and poetry. Of Flemish descent, she grew up in Brussels and London before moving to the United States, where she now lives. She earned a bachelor’s degree in history from the University of Liège in 2008 and then worked as a research asssistant for Veilinghuis Bernaerts (Antwerp) and Le Claire Kunsthandel (Hamburg). She has published her work in Versal, Thema, Palooka, and elsewhere and is presently working on a book of short writings, Meander.

“Evidence of Evidence” is the second iteration of its ambitious project 100/10 (100 days/10 visions). Beginning January 31, 2011 and running for 100 consecutive days, the ICI site and its archives will undergo a multitude of interpretations. ICI has invited 10 visual researchers to set into play ideas that blend contemporary visual practices with aspects of the ICI Earth Cabinet, Ephemera Kabinett, and a 2,500+ volume library inside the eclectic and historically layered ICI space. With just two weeks to conceive of their vision, each curator will conceptualize a new trajectory through the ICI’s corpus, transforming the ICI display by the end of their residency.