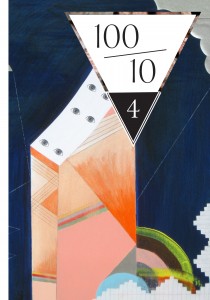 For this fourth iteration of the Institute of Cultural Inquiry’s ambitious project 100/10 (100 days/10 visions), curator-artist Karen Frimkess Wolff and artist Paul W. Evans invite us to “Consider A Path (passing fragments, as much as human understanding may grasp).”  Enriched by the ICI’s extensive collection of books and ephemera for the blind and inflected by Frimkess Wolff’s experience teaching art and art history at the Los Angeles Braille Institute, the pair presents a protean, phantasmic landscape of sight, touch, and sound that traverses personal intention and public participations, knowing and acting, thinking and willing.  How do we apprehend and convey ourselves through worlds, real and imagined?

From a single sheet of iron-on eyes once destined for foster-child dolls, Evans has multiplied the eye images, lifting them onto structures that evoke seeing and seers, scenarios of watchers and watching. Multiple calls to myriad visions—a dense tangle of potential sight lines—confound the classic white gallery space’s imperative of legible display. A laboratory space probes visitors’ sense of touch against the resonant backdrop of Frimkess Wolff’s interactive bell lines.

A unique catalog will accompany this exhibition.  Modeled upon the New Museum’s catalog for its 2008 landmark show After Nature, catalogs for the 100/10 shows exist as a dustcover wrapped around a slightly used copy of a book that has influenced the show’s curator and artist. The 100/10∆4 catalog, housing E.E. Cummings’ Enormous Room, may be purchased in the ICI gift shop or through the ICI website. A reception and curator’s talk will be held on Sat., April 16, 2011, 4-6 p.m.

Beginning January 31, 2011 and running for 100 consecutive business days, the ICI site and its archives will undergo a multitude of interpretations. ICI has invited ten researchers—artists, writers, and visual thinkers—to set into play ideas that blend contemporary visual practices with aspects of the ICI Earth Cabinet, Ephemera Kabinett, and a 2,500+ volume library along with the nooks and crannies of the eclectic, historically layered ICI space. With just two weeks to conceive of their vision, curators will work in a designated laboratory modeled upon the transparent workspaces of 19th-century natural history museums. Each curator will conceptualize a new trajectory through ICI’s body, transforming the ICI display by the end of their residency. 100/10 project participants to date have included ∆1: Alex Harvey with Anna Ayeroff, ∆2: Antoinette LaFarge with Ruth Coppens as well as ∆3: Norway Nori.

Karen Frimkess Wolff is a Los Angeles-born artist whose drawings, constructions, and sound installations have been exhibited extensively in California, throughout the United States and in Germany.  A recipient of the Los Angeles Cultural Affairs Grant in 1991, she was also one of thirty Americans nominated for the 1976 Paris Bienniele.

Paul W. Evans [www.pweny.com] has exhibited widely throughout the United States and in England at such venues as Artists Space, New York, the Brooklyn Museum of Art, and Gasworks, London.  Re-placing found images in specific painted environments, his work explores the tension between originality and reproduction, the infinitely reproducible photocopy and the singular act of painting.