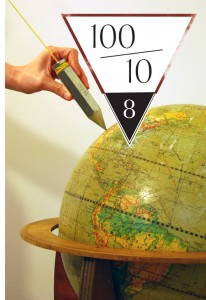 100/10∆8: Rise Industries at the Institute of Cultural Inquiry (ICI)

For this eighth iteration of the Institute of Cultural Inquiry’s ambitious project 100/10, showcasing ten curatorial visions over 100 business days, Rise Industries co-founders Jeremy J. Quinn and Michele Jaquis begin at the heart of the Institute’s idiosyncratic, evocative holdings. There, two objects lie. One, an industrial Acroprint clock, matter-of-factly clicks off comings and goings according to some indeterminate time zone. The other, a globe, renders Earth as a miniaturized perfect sphere, its pasted political boundaries frozen in time and encased in a grid of latitude and longitude. Both imply—and miss—so much.

Quinn and Jaquis take playful measure of the Institute’s phantom worlds, their gravitational pulls, the ebbs and flows of personal narratives lapping at the ICI collections’ contours. Anachronistic time-keeping devices. A faded 1961 Triple-A Trip-Tik presages Jaquis’ from her 2000 cross-country relocation to Los Angeles. Glass slides of images precipitate a kaleidoscopic sense of déjà vu’s possibilities for mis-(re)cognition: uncannily, Michele can mistake these for those taken by her twin sister, Nicole, in India. Expanding upon these moments of “knowing better,” the curators explore the slippages in our concepts of distance and time, in relation to the ICI collection, ICI’s location in Southern California, the geographic sprawl of their collaborators in Los Angeles, Boston, India, and our absolute/ relative position in the Cosmos.

A unique catalogue accompanies this exhibition and extends the Institute’s thinking on W.G. Sebald. Modeled on the New Museum’s catalog for its 2008 landmark show After Nature, 100/10 catalogues exist as a dustcover enfolding a slightly used copy of a book that has influenced the show’s curators. The 100/10∆8 catalog, wrapped around Umberto Eco’s The Island of the Day Before, may be purchased in the ICI gift shop or through the ICI website.

Multidisciplinary artist Jeremy J. Quinn works in installation, video, sound, sculpture, printmaking, photography, and environmental graphics. Trained as an architect, Jeremy looks at spaces in terms of hidden structure or geometries, as well as how they are inhabited and manipulated by people. He is fascinated by the many complex systems of daily life, and tries to find order and clarity beneath the chaos we inhabit. He has focused most recently on interrogating the meaning and representation of landscape, using video and installation to build alternate landscapes in “Mountain” and “Anza-Borrego Expanded Landscape”, and through sound in “Transference”. Jeremy received a Master of Architecture degree from the Southern California Institute of Architecture, and a Bachelor of Science from the University of Hartford, where he studied architecture and sculpture. He is currently a project manager at Pablo Maida Architect in Santa Monica, CA.

Interdisciplinary artist and educator Michele Jaquis examines the complexities within personal relationships, identity, language and communication through video, installation, performance and digital imagery. She earned her MFA in sculpture from Rhode Island School of Design in 2000 and her BFA in sculpture and experimental studio with a minor in psychology from Hartford Art School/University of Hartford in 1997. Her work has been presented in galleries, museums, film festivals, conferences, and alternative spaces through the US and in Australia, Canada, Ireland and New Zealand. Recent awards include a 2011 Otis College Faculty Development Grant, 2011 Creative Capacity Fund’s Next Gen Arts Leader Professional Development Grant, 2009 Vermont Studio Center Artists Residency Grant, and 2008 Director’s Chair Film Festival Best Documentary Award. She is currently Assistant Professor and Director of Interdisciplinary Studies at Otis College of Art and Design in Los Angeles.

Sarah Rushford is a multimedia artist, designer, and arts administrator living in Boston, MA. She earned her BFA from Hartford Art School in 1998 and MA in Media Studies from The New School in 2001. As a multimedia artist she is currently working in writing, video and alternative print processes, and has recently completed a residency at TAKT Kunstprojektraum in Berlin. Her work has been exhibited in Boston, New York, Los Angeles and Berlin and has upcoming exhibitions at Massachusetts College of Art and Design and the Worcester Art Museum. With previous experience as a Media Arts Teacher and Media Literacy Coordinator, Sarah recently founded Circadia, a web design and production company for artists, small businesses and non-profits. She is also an Assistant in Institutional Research at MassArt and has been a member of Axiom Center For New and Experimental Media in Boston.

Tim Devin is an artist based in Somerville, MA, whose work deals with humanizing public space, and combating the negative effects of urban anonymity. Tim’s projects have involved community, public space, books, zines, maps, walking tours, and giving things away for free. He has shown his projects around Boston and the U.S. as well as in a number of different countries. Since early 2011, Tim has also been a board member of the Somerville Arts Council.

Mike Feldman is an LA-based pianist, composer, and sound mixer. His work spans many genres including jazz, funk, electronic, classical, and experimental. He explores the process of improvisation and its correlation to the subconscious mind, as well as the relationship between sound and image. He is also very interested in the varying frequencies and amplitudes to which the air molecules around his head are vibrating at any given moment. Mike holds a Bachelor of Music from the Hartt School, in Hartford, CT where he studied Music Production Technology and Jazz Piano. He is currently a staff audio editor at Sony Pictures, and is co-owner of audio post-production company Boxing Nuns. He is keyboardist for LA funk band Cousin Junebug.

Nicole Jaquis is a new media artist and teacher, committed to empowering others to utilize various multimedia technologies to explore and share personal stories, ideas, differences and commonalities, in the pursuit of transcending both geographical and cultural boundaries. Since 2001 Nicole has split her time between New York and Northern India, while documenting the Naga Sadhus and Sadhvis of Juna Akhara, (the largest and oldest organization of Shiva worshiping Hindu ascetics). As a founding member of Projectile Arts based in Brooklyn, she was an Associate Producer for their documentary, Take Me to the River. She is now the Founder and Director of Aesthetics With Cameras, which provides multimedia services, tools and training to Juna Akhara. Nicole has a BA in Photography and Philosophy from Lake Forest College; has completed graduate level coursework in Educational Multimedia Development at Harvard University and in Photography at International Center for Photography. Her photographs and videos have been exhibited through out New York, New England, and India.

John Kim is a Los Angeles-based conceptual artist, who works with a variety of media to question everyday assumptions and rethink the manners in which we interact with our world. His process is exploratory and often highly whimsical. If asked to summarize his work, he’d likely say he’s “still trying to figure out this art thing,” and “I am not a very serious person but I do take art very seriously… I think”. John Kim received his BFA from Otis College of Art and Design and his MFA from California Institute of the Arts.

Boris Margolin is a computer programmer, writer, and musician.  His focus is on structures, physical or abstract, that embody information in unexpected ways.  Boris earned a Bachelor’s degree in Mathematics from Simon’s Rock College and a Master’s degree in Computer Science from the University of Massachusetts Amherst, where he focused on security protocol analysis and design. He lives in Jamaica Plain, Massachusetts and is the chief technologist of a small financial services company.

Beginning January 31, 2011 and running for 100 consecutive business days, the ICI site and its archives is undergoing a multitude of interpretations. ICI has invited ten researchers-artists, writers, and visual thinkers-to set into play ideas that blend contemporary visual practices with aspects of the ICI Earth Cabinet, Ephemera Kabinett, and a 2,500+ volume library along with the nooks and crannies of the eclectic, historically layered ICI space. With two weeks to conceive of their vision, curators will work in a designated laboratory modeled upon the transparent workspaces of 19th-century natural history museums. Each curator will conceptualize a new trajectory through ICI’s body, transforming the ICI display by the end of their residency. 100/10 project participants to date have included ∆1: Alex Harvey with Anna Ayeroff; ∆2: Antoinette LaFarge with Ruth Coppens; ∆3: Norway Nori; ∆4: Karen Frimkess Wolff and Paul W. Evans; ∆5: Pam Posey with Christine Nguyen; ∆6: Christel Dillbohner with Inge Kamps; as well as ∆7: Christian Smith and Rosie Woodward Smith.